What Is Binding Arbitration? 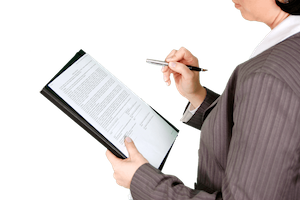 Binding arbitration is a type of alternative dispute resolution where two parties settle their differences outside of court with a third-party decision maker, often called an arbitrator. Forms of arbitration have been used since the 19th Century, but the Federal Arbitration Act was officially enacted in 1925, which can be found in Title 9 of the U.S. Code. The intention of arbitration is to settle disputes between parties quickly. Those involved don't necessarily have to go through the long process of litigation, because arbitration takes place outside of the court, and appealing the decision is nearly impossible. The problem, though, lies in the fact that sometimes arbitration may be the required form of dispute resolution when someone signs a contract or agreement with an arbitration clause. If arbitration is required of you, you may be waiving your rights to access the courts. If you have questions regarding your arbitration case, you may want to contact an experienced arbitration lawyer at the Coye Law Firm today to learn about your rights and options.

The Possible Advantages of Arbitration

The reason some people believe that arbitration is preferable in the first place may include some of the following:   But there are plenty of people who would oppose arbitration for its limitations.

Supporters of arbitration might say that arbitration is fair. After all, the arbitrator is meant to be impartial, neutral and removed from the two parties involved in the proceeding. But who chooses the arbitrator? Who chooses the one making the final decision? It may differ from state to state, depending on the laws, and it may differ from case to case, depending on the contract, agreement or issue, but usually the party who requires arbitration in the first place is the one who will choose the arbitrator, or at least choose the organization from which the arbitrator is chosen. That's not to say that arbitrators are biased individuals. Some may be fair and impartial, but the possibility of an arbitrator having a bias in a case may be more likely than jurors having bias in litigation. Jurors have to go through a detailed process called voir dire before they are chosen. In voir dire, lawyers are allowed to ask scrutinizing questions and interview the potential jurors to determine whether they are as neutral as possible, regarding the case. But in arbitration, the party requiring arbitration is allowed to name and appoint the arbitrator in the way they see fit, according to Title 9, Chapter 1, § 5 of the U.S. Code. So since the arbitrator is appointed by the company or entity you have the issue against, it may be possible that they would have a bias toward them. they are, after all, the one providing work for them.

If you sign a new terms and agreement with your cell phone provider, or if you sign a contract with an employer for your new job, you should pay close attention to all the details and nuances of the agreement. There may be an arbitration clause, which binds you as an individual to settle issues outside of court through arbitration.

"A written provision . . . to settle by arbitration . . . shall be valid, irrevocable, and enforceable."

When you sign a contract or agreement you lose your right to access the courts and the right to appeal the decision of the arbitrator after it's been made. But by signing and agreeing to the contract or agreement, you're essentially waiving the right, not necessarily losing it. And this may also be done with a simple click of a button, rather than a signature. In this modern, technological era, you may have the opportunity to submit to a company's terms and agreement online, which may only require you to check a box, acknowledging that you agree. With pages upon pages of legalese, some people may not even read or scan what it is they are agreeing to. In Title 9, Chapter 1, § 2 of the U.S. Code, it says that "A written provision.. . to settle by arbitration . . . shall be valid, irrevocable, and enforceable." This means that an arbitration clause will be considered "enforceable" if you've agreed to it. Your chances of taking your dispute to court in front of a jury may be limited.

Binding Arbitration and Your Case

Binding arbitration may be an issue that comes up in your personal injury, workers comp or Social Security Disability case. If you're dealing with an insurance company, an employer, or any other corporation or entity that requires you to settle a dispute through arbitration, your rights may be limited. Click-through terms and agreement and contracts with fine print are a couple examples of situations where you may find yourself agreeing to binding arbitration without even realizing it. In binding arbitration, you agree that the arbitrator's decision and determined award are final, and you may have little to no hope of appealing the decision in court. These situations may become tricky and highly involved. If you have any questions or concerns about your case and arbitration, feel free to contact an experienced attorney at the Coye Law Firm. Call 407-648-4940 for legal help and counsel.