Turning a Popcorn Wagon into a Carnival Business 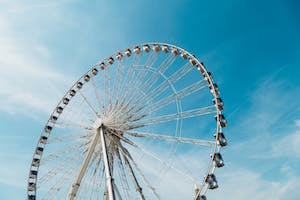 Many people can look back on their childhood and recall fond memories of waiting in line for the Ferris wheel to overlook the bright city lights, indulging in a heaven spun cloud of cotton candy while juggling the corn dog and funnel cake, or competing in the many games of ring toss to win the biggest stuffed animal. Known as the best time of the year for those young and old alike, the carnival has been a source of entertainment and fun for the whole family. One couple in particular turned their passion for the carnival into something that would create lasting memories for years to come. As the grandparents of our probate/family law attorney, Amber Williams, Richard and Judy Carl started their carnival business in the late 60's.  The carnival was a big part of Richard's life growing up as his parents and grandparents were involved in the carnival business (his father and uncle were both circus performers). Unsurprisingly, in 1966 after he was discharged from the Army, he used his stipend to buy a popcorn wagon. On the weekends, he would go out and set up the wagon attracting many hungry patrons. After he started making money Richard decided he was never going to work for anyone else. This dream became reality when he started Crown Amusements with his wife, Judy, in Belleville, Michigan.  Striving to be a leader in the outdoor amusement industry, Crown Amusements offered various equipment rentals of games, rides, and food for all types of events. It quickly grew into one of the country's largest carnivals with 53 office-owned rides and played over 75 dates a year. This success did not come without difficulties, however. Richard and Judy originally faced challenges of finding places for the carnival to go, establishing routes, drafting contracts, and training the masses of illiterate employees that joined the carnival in search of work.  However, with the help of family and friends (Amber used to help out with the carnival during the summers growing up) the couple successfully managed the business for many years until it was sold to Pugh Shows in 1999. Currently, they operate under RAC Amusements. Richard now owns a fairground in Georgia, and has contracts to play in the Bahamas. He and Judy are now retired, residing in Hobe Sound, Florida.